Shhh takes the power and poetry of silent film as a starting point for screenings, performances and an exhibition.
Shhh loves film in the broadest sense of the word. 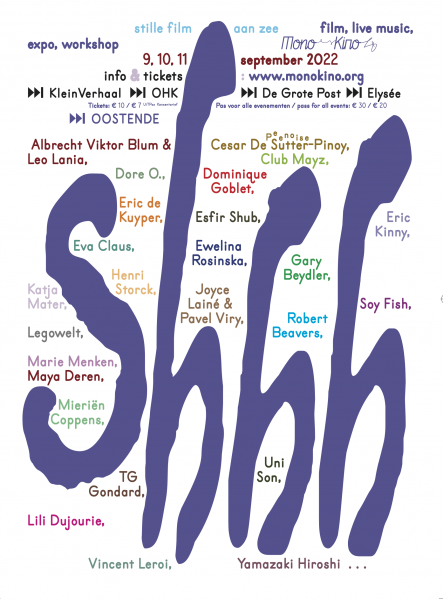 For its fourth edition, the festival will explore the past, present and future of silent moving images with a special attention for the interfaces between film, visual arts and music, homemade animation, political found footage works from the 1930s, para-cinematic speculations… And of course, as always: the sea, on screen and on site!

This year Shhh is organised by Monokino in collaboration with CINEA, OHK, KleinVerhaal, Pleasure Island and Universiteit Antwerpen.
With the support of Vlaamse Gemeenschap and Vlaams Audiovisueel Fonds.

SUPPORT — We currently work without subsidies, so your support is more than welcome and literally brings light to the screen:

Whoever walks in Ostend today is confronted with a fantastic eclecticism: a brutal grey apartment block exists next to the glorious Thermae Palace. The mighty, almost Stalinist, building of De Grote Post dominates the Hendrik Serruyslaan. A former department store houses a museum for contemporary art. Belle-époque houses are hidden in the quiet but stately streets.

In 2017, one void struck artist Anouk De Clercq: that glorious film culture of Henri Storck, James Ensor or Raoul Servais had disappeared from the streets. With the closure of the Rialto cinema, the last independent cinema from the Ostend cinema circuit also disappeared. Against such an extraordinary backdrop, with the sea as a large projection surface for images, stories and histories, that is such a shame.

And so the idea of Monokino ripens: one room, marked by an equally fantastic eclecticism, where cinema can be itself again. One room where long and short films, film classics, auteur cinema, video art, experimental films, animation, or the work of young makers can find a place. Monokino shows, questions, responds, engages in conversation, invites, welcomes, puts in perspective. Monokino is a place of, by and for people from Ostend, for professionals and enthusiasts, for young and old, for those from here and those from there.

The films that Monokino wants to show don’t only live on the screen. They also spread between residents, spectators, and makers. In that sense, Monokino is also Kopfkino: a mental cinema, where images get the chance to live and multiply.

That’s how Monokino drifts nomadically through those eclectic streets of Ostend and settles in the heads and hearts of the people of Ostend. Soon it’ll moor for good.

Monokino wants to drive cinema into the 21st century and illuminate the adventurous side of film. While we strive for a permanent place as anchorage for cinefiles from Ostend and beyond, Monokino operates as a nomadic film platform.

The sea is Monokino’s favourite projection surface for images, stories and histories. In anticipation of our next screening, we’ve started to collect a list of films in which the sea plays a main or supporting role. Can you think of a film that’s not already on our list? We’d love to hear about it via info@monokino.org.